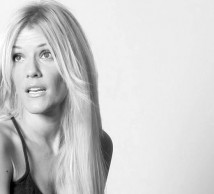 Ava is an independent fashion designer residing in the Greater NY Region. She has over 10 years experience in the apparel industry with a career that was heavily centered in the premium denim market, and nurtured in the heart of America's denim capital: Los Angeles. She is also known for her Carmichael bicycle bag collection, which has been recognized and sold worldwide.

She has worked as a designer for independent apparel start-ups as well as established brands and companies with revenues exceeding $1B. Sewing since the age of 12 with much of her creative spirit nurtured and inspired by her Grandmother, Ava Carmichael began designing professionally in 2003 with her first experimental collection of denim.

In 2005, while attending Wade College of Design in Dallas, she launched her first evening wear collection in Austin, TX during ATX Fashion Week and debuted her collection shortly thereafter at The Dallas Market.

Her interest and career then took her to Los Angeles in 2007, where she worked with premium brands such as Prospect Denim, Brown Label Jeans, Solow, as well as some of the best factories and wash houses in LA.

From 2009-2010, she lived in New York and Dallas, and successfully launched the denim collection, Mockingbird and the junior sportswear line, Berry Jane. She is the owner and designer of Ava Carmichael Brands, LLC and produces the Carmichael bicycle bag collection as well as Berry Jane yoga and activewear.

From 2010-2012 She was the Sr. Denim Designer for Miller International, designing the men's and women's denim collections, as well as three seasons in women's tops (knits and wovens).

Ava Carmichael works as an independent designer and manufacturer of apparel and accessories for her own brands, as well as private labeling and collections for clients.

Send a message to avamarie